I’ve spent many a time on northeastraces.com looking at races, looking at the diary and not bothering to enter any.

Since I started running in 2012 I’ve barely done any races!

The only races I’ve attended quite frequently are cross country. I’ve only ever raced one 5k and one 10k! Pathetic really.

So I decided to provide a bit of motivation by trying to find a race I felt I could win.

Now I know running races isn’t all about winning. My main concern is to be the best I can be. But I fancied trying to find a race where I could mix it at the front, and experience having a go at winning a race.

I picked out the Run Nation (Run Durham) Hamsterley Forest 10k. Being from Durham I thought it would be close to my home town, not realising it was actually over a 1hr drive from Newcastle.

It looked an interesting course in beautiful surroundings. It was out and back with what looked like a tough uphill first half and then back down second half.

My training started to come together a little a few weeks before the race apart from some shin pain in my left leg.

I’ve been through it before. I know it’s a bit of a stress reaction which tends to be overcome.

I did a 40 minute threshold on Wednesday which was a staple of my training when I was coached under Dave Tune.

The simple fact of the matter is I haven’t been running enough thresholds but I was very pleased with the 6.4 miles I put in and overall starting to get back to where I was. It’ll be important to keep these thresholds going and increase the weekly duration.

My plan for the 10k was to aim for 6 minute miles first half and then simply hammer it as hard as possible second half. I also had it in mind that I didn’t want to lead first half but I did want to be in the lead group. And I did want to try to lead most of the way back down. My goal was to win the race.

It’s easy to look at last year’s results and feel like you have enough to win but, still, you just don’t know who will turn up on the day.

I quite enjoyed the drive up to Hamsterley. After a few issues with parking (£5 quid all day) I did a 15 minute warm up and off we went to the start.

The starting sensors were literally set up before our eyes and in a few minutes we were away.

I just focussed on getting into my stride. I didn’t worry about maybe 5 or 6 lads getting off quite quick. I knew it was 10k and I knew it was 5k of gradual climb with a stiff km between 4 and 5. I needed to keep it steady.

But as usual the plan had to change. I was in 5th maybe half a mile in and a Morpeth vest was already getting away with another lad in Blaydon chasing.

I couldn’t just let them go. I was already running faster than 6min miles but I had to inject a little more. I got past a couple of lads into 3rd and had the Blaydon lad a manageable distance ahead. I forgot about the Morpeth lad he must of been running faster than my 5k pb pace.

But I’m not sure what happened mile 2. It dragged and I was aware I was sitting on 6min mile pace. Despite that being bang on original plan it didn’t feel steady and, because I knew it was losing me ground on first place, it was making me anxious already.

Perhaps the continual slight incline was also hurting me?

Anyway, I was now losing ground on 2nd. And the lad in 4th couldn’t be heard.

I’m not sure why but I’ve never raced in a pack ever. The closet I got was the Blyth 10k last year.

Someone for company to try to work back may have helped. As it was I now had the incline between 4 and 5k in sight and I wasn’t looking forward to it.

My stride was laboured and slow.

I tried to pick up. I struggled up the hill. A bit demoralising seeing 1st cruise past back down. Then 2nd. As I got round the top I really tried to get going. I’d slipped to a 6.34 3rd mile which was not good enough. The strength and stamina just wasn’t there.

Feeling a bit demoralised I opened up the stride, heaved for air and got going. Got quite a lot of encouragement from other runners still coming up the hill which was appreciated.

I was trying hard. I really needed something well below 5.30 in the 4th mile. As it happened the 4th mile was definitely the fastest. But I don’t think I was running efficiently and relaxed. I was trying a bit hard and certainly not running relaxed and efficiently.

To be honest at this point 1st and 2nd were gone. It was turning into a training run. A PB was unlikely (or was it, I struggled to remember what pace my 35.37 10k pb was) and chance of a win gone. That said, I was still keen to hold onto 3rd.

Only my 2nd 10k, naively forget it's quite a tough distance!

At this point some car issues proved to be a little annoying and off putting. I had one behind for what felt like a mile. I was supposed to keep to the left but there were runners coming on the right. So the car was just staying behind. But it was forcing me to look round.

Cars were coming the other way. Not an excuse. Just distractions I didn’t need as I was trying to keep on the throttle.

The 5th and 6th miles were gradual down hill rather than the pronounced slope of the 4th. I ticked off a 5.49 and 5.43. Actually I enjoyed the run in those miles despite not really taking advantage of the contours.

After the cars cleared the course was completely clear. I had the course to myself. A chance to think, to realise what I was doing… Something I love and want to do as best as I can. I am a long way from achieving what I know I can but I’m back trying. I smiled, I thought to myself this is great, enjoy it.

Coming to the finish there was some nice support.

And it was good to shake hands with 1st, 2nd and 4th. It was no disgrace like it had felt first half.

Official time was 36.24 which is less than a minute away from my PB.

It’s something to work with. Not a bad day out by any stretch of the imagination. 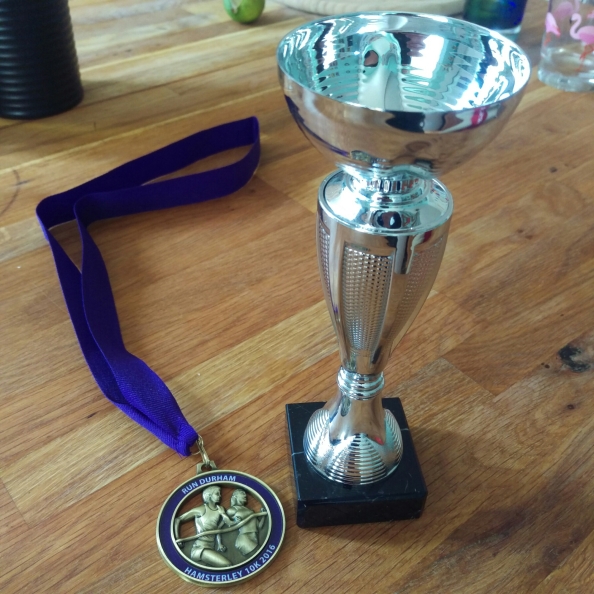 The key thing is I’m back, 6 weeks into training. I have a platform to get back to where I was and beyond. I know weeks 7 and 8 can see some nice gains in fitness and I’m excited by the prospect of a couple of relay races coming up (work travel permitting).

Onwards and upwards as they say.

My last hard 5k effort was on 9th of January at Newcastle parkrun. I was frustrated with a 17.10 and vowed to get that final piece of stamina to overcome the 3rd mile slowdown that invariably happens to most mere mortals in what is one of the toughest distances to run well.

Fast forward to 9th April and I’m just starting to feel human again after a long break in February and into March.

The training has been going OK, nothing special. I still feel like I’m just trying to get back into the normal routine.

The key is to get back up to around 40 miles a week consistently. I know once I’m there I’ll be back to where I was mileage wise and then it’ll be a case of getting that final little piece of the jigsaw in place. More on that later.

So I felt a bit crap on waking at 8am. I’ll be honest I was going to knock my plan of a parkrun on the head. I’m glad I got out the door.

Jogging down to Newcastle parkrun I felt OK. It seemed nice and calm wind wise and only a little damp.

Getting down to the start line I did a little minute at 5.20-5.25 pace which felt nice and comfy so all good.

Bumped into Michael Hedley aka JJ champ and away we went.

First mile wasn’t great. Kind of got into it second half but felt a bit one paced. Clicked through in 5.33. I felt disappointed. I just thought 5.24 pace would happen naturally.

Anyway I was in fifth place and chugging along.

I got to work a bit mile 2. I could hear the sound of quick feet right behind me and I was keen to stay in front. I managed to do so for maybe just under half a mile. Then the lad went past.

The natural instinct was to put him right back behind. I did that but with the benefit of hindsight it was unnecessary. The lad was running a great tempo. His cadence metronome like. Maybe better to lock onto that and take a tow.

The effort sparked a bit of negativity as I felt it. I managed to keep in front maybe 200-300m and he was past again.

This time I resolved to stay on his heels.

What followed was really disappointing but perhaps not unsurprising…

I slowed to a halt.

The lad got 10m on me in maybe 20 seconds. Another lad was past clearly in pursuit.

There wasn’t a hint of anything in my brain or in my legs to rally round. I just slowed and slowed. The thought of giving up crossed the mind.

Luckily I kept on going, but it felt very laboured. I was shocked at how far ahead the two lads had gotten in the space of a quarter mile.

I was spurred on a little by noticing another lad maybe 10-15m behind coming towards 4k.

Critically my cadence had just gone, from averaging 180 spm in mile 1 to 171 in mile 3. This is something I really need to work on. 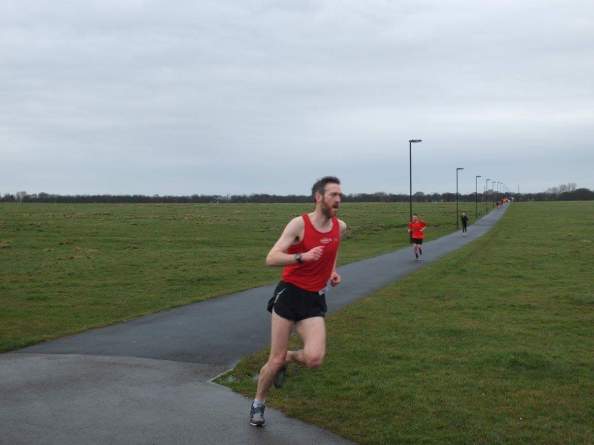 Coming for home around 4.5k, overcooked it and finished off

I managed to recover a little to the end and finished with a 17.34.

Yes I was a little annoyed at myself immediately afterwards but on reflection I know it’s still early days.

So the key is to get my mileage back up to 40 and really start nailing some decent threshold runs up to 40-45mins coupled with some decent long runs.

The cadence thing is a big issue for me.

Being 6 foot 2 I naturally have quite a languid style. I sometimes try to use my stride length rather than quick feet which doesn’t come naturally. But the issue is long, slow strides have a braking effect. So I need a balance between cadence and stride length.

This is a key focus.

Looking ahead I’ve entered a little 10k later this month, more as a training run. I’ve also got one eye on the Terry O’Gara 5k the day after and a couple of relays in May (work permitting).

The plan is to be really back in shape early May/June.