I also turn 35 next year so will need to look into some Vet 35 targets to be confirmed. Maybe track or XC.

The closest I came was running 17.10 on no less than 3 occasions at parkruns. I ran 17.10 twice at Riverside parkrun and once at Newcastle parkrun.

Arguably the 17.10 at the Riverside in April was a great run and just a little regrettably did I overcook the first mile (5.11) and I was hanging on for dear life after that. The 17.10 at Newcastle was also a strong run. The 3rd 17.10 on Boxing Day at the Riverside can be discounted.

Other than that I went through 5k in 16.34 at The Blaydon Race but that’s net downhill and also doesn’t count. 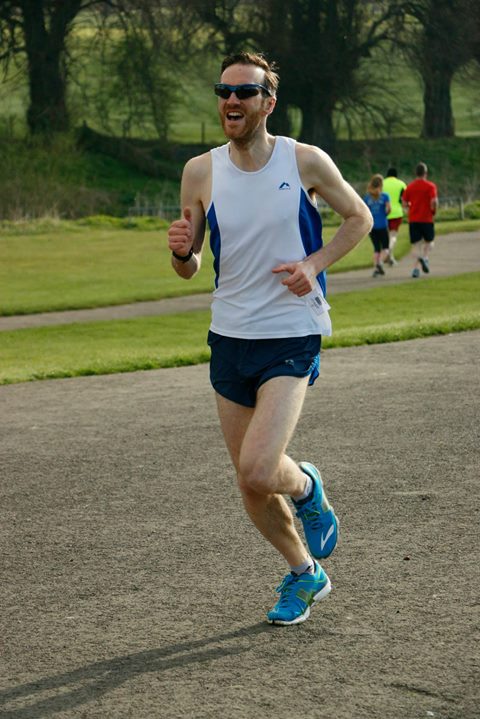 Finishing off in 17.10 at Riverside parkrun in April

One of my races of 2015 was the Blyth Valley 10k in which I completed my debut over the distance in 35.37. A very strong run in windy conditions.

Battling through windy conditions in the first 5k at the Blyth 10k in April (this is one of my favourite pics of me running!)

Didn’t complete this goal but completed a sub 1hr 25m HM in training recently. I think I have a decent HM in me. I’ve always said I would never run a Great North but never say never… I plan to step up to 10 miles in 2016 and take it from there.

The highlight of my 2015. Having not trained that well in the few weeks leading up to the race I managed to put everything to the back of mind and just went for it. The wheels came off somewhat in miles 4 and 5 but a 62nd place finish was pleasing and this, my favourite race of the year, will remain a key target again in 2016. I want another big break through. 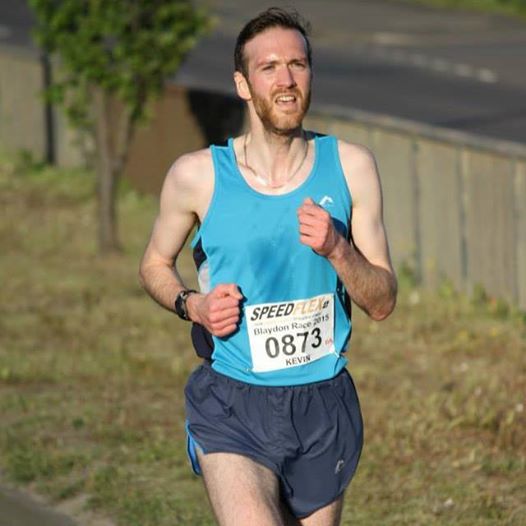 A tough section at Blaydon, but managed to win a prize as one of the leading Unattached runners in the race

Achieved – won runner of the season and Chairmans award for outstanding achievement from Jesmond Joggers for my contribution which was very pleasing.

My strongest season in the NEHL and achieved my goal of qualifying for the Fast Pack at Wrekenton in the last of the 6. This pic was at Cramlington (race #1)

Missed the race due to Work commitments.

Overall I’m pleased with my 2015. Undoubtedly I’ve built a stronger aerobic base upon which I can grow further in 2016.

I’m still “under raced” in the grand scheme and still consider myself as “learning the ropes”. More to come.

I’d like to thank Dave Tune and Jenny Blizard (and others at Blizard Physio) for supporting me in 2015.

I’d also like to thank Scott Armstrong for all his support whilst at Jesmond.

Finally I’d like to thank Frank Watson and all my new team mates at Elswick Harriers for making me feel so welcome at my new club.

I’m going for more improvement in 2016 and I’ll be posting soon on my targets and how I plan to train and race to achieve them.

One of my main goals of 2015 was to compete for the 3rd time in the North Eastern counties cross country championships at Sedgefield and improve on my 67th placed finish on the Town Moor in 2014.

Unfortunately a work trip to London put paid to that.

Seeing the conditions at the course yesterday it was clear that racing would have been one of the toughest tests I’d faced.

I had mixed feelings. On the one hand I felt in decent shape and on the other I wasn’t envious of the conditions.

As a result I’ll not race now until the next North East Harrier League fixture in the New Year.

Training wise I will keep ticking over the festive season.

I want to increase my total weekly duration from an average of 4-5hrs to more like 5.5-6. I’ll predominantly keep it easy in nature with a sprinkling of faster paced stuff.

In other news I was very grateful to receive an award from my old club Jesmond Joggers.

I must admit I was very surprised when I found out I had won the award given I left in the club in April!

It was lovely to pick up the prize of Chairman’s Award for Outstanding Achievement for my contribution to the clubs Division 3 title and promotion in the North East Harrier League 2014/15. 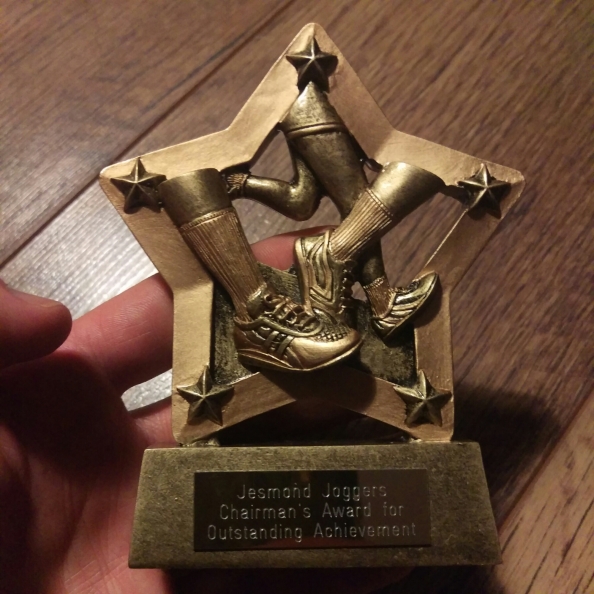 I really appreciate my time at the club where I was able to have my first experiences of competition after such a long time away.

I was able to build confidence and realise again how much I love the sport.

Thanks to Scott Armstrong and everyone else at the club for the support and fun times.

I’m not sure how many times I’ve ran as far as Half Marathon distance since I started running in 2012.

I would guess may 2 or 3 times have I ran that far or further.

Truth is I’m not a fan of the traditional long run. Never really been too fussed on running for longer than 60-80 minutes.

But this week just gone things didn’t quite go to plan.

I had completed a decent club session at Elswick Harriers on Tuesday night. It was only the second time I’d managed to make a session since joining in the summer and by coincidence it was my second go tackling the “Walbottle loop”…

23 minutes of running taking in Walbottle bank. Last time I’d tackled 8 approximate half mile loops. It had been a tough session but it felt beneficial. Like a good threshold session with the added challenge of having to get up the hill. Plus a test of technique on the downhill bit just after the climb when you’re still gasping for air.

I was looking forward to another go.

Super vet Lee Bennett was there again. He kicked my arse the first time I’d tried to stay close to him. He’d beaten me soundly at Druridge Bay XC as well but I had a loose plan of seeing how long I could stay with him here…

About two loops was the answer!

Anyway I dug in despite some pain and the heart rate reaching 189bpm at one point. I never push that hard on my own and an obvious benefit of making training a little more competitive from time to time.

I got my 8 laps done somewhere between 24 and 25 minutes. Overall satisfied on what was a typically blustery night.

The main point of the week was to get on the start line of the Norman Woodcock Memorial 5 mile race on Saturday in one piece and raring to go to smash my current PB of 31.16.

It’s a false PB as I’ve ran 30mins on several occasions on threshold training runs so I knew that would go but by how much?

Unfortunately the weather signals weren’t good and Elswick Chairman Frank Watson had already called in the water pump to try to sort out a flooded course.

The race was finally cancelled on Thursday and I was a little disappointed.

I’d been out on the Town Moor and had a little spin of what was planned to be a mile but end up about 3/4. I let fly a little and enjoyed it. Just over 5 minute miling and feeling strong.

It was all I needed to feel confident of ticking off 5 in 5.30-5.35/mile at the race in decent conditions.

That left me a little in limbo and knowing I had no races until after Xmas and New Year.

It would be easy to lose any semblance of discipline in those circumstances but I am motivated to keep fit over the festive period. I’ve even managed to keep my little morning strength routine going!

Rest day on Friday and decided to do some sort of treadmill session at the gym on Saturday whilst “Desmond” did his worst.

But such had the way the week had been I had to ditch that to help my girlfriend out which I was more than happy to do as I was feeling a bit weird with what felt like an ear ache.

Not to worry, one treadmill session missed isn’t the end of the world.

Waking up on Sunday I felt good. Had some breakfast and coffee far too close to the run and came up with the madcap idea of 6 & a 1/2 minute miling a solo Half Marathon. Looked it up on the pace charts in Daniels and saw it would come out around 1hr 25mins and sounded about right for what I wanted to do.

Set the cadence vibrate on my Garmin (really enjoying this feature) and got out just focussing on getting in the 6.30/mile rhythm.

I was really surprised how easy it felt. It really felt like a jog. Got to 40mins and apart from the “I’ve got to keep this going for another 45” it was a walk in the park…

I got to 65mins and my heart rate was still very settled at 160-165bpm which is lower than full marathon intensity. But I had to head back up home which is a little uphill.

And so the last 20 minutes were tough but I actually picked up the pace. Was working harder at 165-170bpm but was averaging 6.25/mile.

That’s a huge training PB. I don’t actually know what my previous is but it was probably 1.28.

Anyway, to run a half in sub 1.25 at an average heart rate of 163bpm is a huge surprise and gives me a lot of confidence in what I can do in the next 6-12 months.

I’ll be spending the next couple of weeks setting some goals for 2016.